Today is my little brother Val’s birthday as well as our old friend Ian, and the musician Craig Owens.

After Craig was booted from Chiodos I was –this is very, very cliche but– heartbroken. They really had something good going for them. Chiodos are still alright but those sparks will never burn as bright, burn as big. I still follow his solo project and listen to his other deceased projects such as Cinematic Sunrise and Isles & Glaciers. But it seems he is still growing musically and as a person because he posts updates of his new band and self-help quotes on Twitter.

Craig has been one of my heros lyrically for a short while. I think I started listening to Chiodos at the beginning of 2009, though I wish I could have bragging rights over say, three years. Chiodos as a combined effort changed the way I listened to music; by that time I was far from my Disney roots. Today the harder or faster music I’m listening to is mainly from the likes of Set Your Goals, Four Year Strong, A Day To Remember, Pierce The Veil, and Underoath. Chiodos was like a gateway drug into this fascinatingly insane music — I think I can say I have warped roots now. Craig’s voice was piercingly highpitched but he never failed to come back with a growl. I loved how he could sing the most hateful, blunt, heartfelt, and truly creative lyrics yet they could sound so beautiful. His voice is a gift and that he chose to share it and connect with people through music is an accidental accomplishment.

I support whatever he continues to do with his mucial career and hope that some day I meet him so I can tell him all of this.

“No Hardcore Dancing In The Living Room” will always be my favorite. 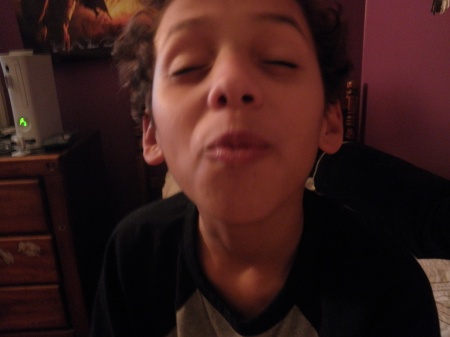 I am quite sad. I absolutely love Aaron Gillespie to death and since I do, I will support him in anything he chooses to do with his music. Though sadly, he is no longer going to be a part of Underoath. I love Underoath as a whole and so if any of members were to leave it wouldn’t feel complete, and Aaron was a big part of UO for me. UO have a way of capturing you, it’s like a hurricame of sound swallowing you up. And then Aaron comes in with his soothing voice. — That moment when I was backstage at Warped Tour during the song “It’s Dangerous Business Walking Out Your Front Door” when Aaron slamed his drum sticks against the drum for that quick solo before he sings, I’m drowning in my sleep. I’m drowning in my sleep. The crowd became still for those few moments to sing along. That was the best moment of my entire life.

I do know Aaron is still playing music with The Almost. They are great but not greater than UO. No, definitely not greater than Underoath. I have met Aaron twice, at my first and only UO show and then at an Almost show. He is one of the nicest people. He writes and plays completely amazing music, but I will miss him in Underoath. I just don’t think it’s fair that I didn’t get another chance to see Aaron with Underoath, but I suppose it’s like Craig Ownes when he was booted from Chiodos. Though, this seems like a nicer departure that the group talked about. Not just a phone call.

Comfort always made the rescue

I can barely stand to write about this right now for I feel I might just cry. Why oh why did Chiodos kick Craig Owens out of the band?! I only found out about this today, though it happened recently. Craig Owens WAS Chiodos. How could they kick him out just like that? So many times I turned to their music when I was feeling upset. Especially their song “No Hardcore Dancing In The Living Room”. Craig’s voice was what set Chiodos apart from every other band. (Though, I must say, the piano pieces were also very beautiful and Jason’s guitar riffs and hooks were pretty insane.)

I was on Polyvore looking at some girl’s set and she had commented that Chiodos kicked Craig out of the band. I thought I knew for sure this was a silly rumor. So I Googled it. Then I knew it was true when I saw that Alternative Press had covered this story. I read the article in shock, while inside I really did want to cry. I ran upstairs and yelled, “IT’S THE END OF THE WORLD.” My dad gave me a funny look then resumed watching something on TV. I ran into the kitchen and repeated myself, hoping my mom would ask what was wrong so I could rant.

I told my mom Craig had been booted from Chiodos and I ranted. All the while I told her this I almost started crying with sad, angry tears. How in the world could they make a new record and then decide that Craig can no longer be a part of it? How is that even fair?

Craig, I want to let you know that whenever you are touring with Isles and Glaciers or Cinematic Sunrise or even a solo tour and you happen to stop by Kansas City, I will be there to support you and your music. Though, nothing will ever be as amazing or the same as Chiodos. When Chiodos included you and Derrick Frost, you were the world to me. The old Chiodos still means the world to me. Now every time I shall listen to a Chiodos record, there will be a sadness left over.

We’re screaming at the same moon.

Craig Owens’s screaming is calming me down right now. It’s keeping me in the clouds. His screaming does two things for me. Either I want to headbang to the sound of Chiodos’s music or I want to go to relax to it. Not that it’s boring, but that it calms me down and puts me in a mixture of reality and fiction. It’s like I could pretend I feel the same way as Craig did after his first love broke his heart (thus he wrote an album about her). Yet this time I feel more like the instrumental rather than the lyrics. It’s like when I was listening to Brand New’s Déjà Entendu record.

I’ll lie on the dirty carpeting in my room (that can’t be fixed unless we were willing to pay for new wood floors) and breathe. I like taking deep breaths because it makes me feel a little better. It takes some of the frustration away. — I sound cheesy again. — When I push all the frustration back I feel like and old toy disguised as a new one.

It’s not a big deal. It has been three weeks since my last guitar lesson but I’m mad at myself. This is part of learning, but I am always angry at myself for not knowing what he might throw at me. School starts next week. I was supposed to read two non-fiction books from a list they sent me. I lost the list and didn’t read the books. I have to be tested on them. I guess I’m just looking for more stuff to mope about.

We all have our good days and our bad days, yesterday was a mixture of the two.

Song Of The Day – “No Hardcore Dancing In The Living Room” by Chiodos http://www.youtube.com/watch?v=wJCX_Nit388

Chiodos. This is a band that have definitely earned my respect. I managed to pick up a used copy of their first album, “All That’s Well, Ends Well” in November of ’08 for five dollars. I love that album and from the songs I look up off “Bone Palace Ballet” they just get better. Craig Owens has this beautiful, yet odd, high pitched voice that becomes so addicting to me.  Then he can scream at the top of his lungs all of the sudden. The guitarists, bassist, keyboardist, and drummer, all know what they are doing and sound amazing whether in recording or live. I adore the songs, “A Letter From Janelle”, “Expired In Goreville”, “Baby You Wouldn’t Last One Minute On The Creek”, “Bears Make Money, Pings Get Slaughtered”, and “Lindsey Quit Lollygagging”. I don’t listen to screamo, or hardcore other than Chiodos and honestly I don’t consider them to fit into either of those genres. Chiodos have a style all their own with songs that make you sad or just feel like they fit in some point in your life. I don’t understand it.

From what I have seen in videos, read, or heard Craig has this really generous personality. I want to meet him, it makes me want to know him, be his friend. I suppose that sounds creepy, but I don’t mean for it to. While listening to Chiodos, I’ve developed a small “crush” on Craig Owens. You are probably thinking, it’s always the lead singer, right? Get this, I know he has a girlfriend and I’m not hoping for him to break up with her like some fan-girls. I admire his wisdom and talent to understand the concept of music.

I keep looking on their website in hopes of finding a tour date for them to come near me. I keep saying to myself, “Come to ____!!!” Another clip I found on YouTube when they were here on Warped Tour of ’07. *sigh*